As an Associate Professor of Business, I will be teaching online at Cavalla International University.

My first class that I will be teaching here will be my Financial Crimes course. 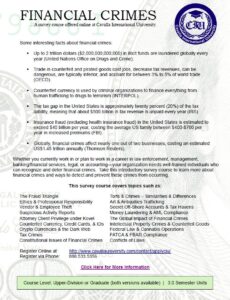 For my Fairfield-Suisun Adult School Accounting students, there are transfer credit opportunities.  Please contact me for more information.

For many years, I have argued that police need to be licensed like most other professions.  The reality of the situation is that they are not.  The exceptions are for their Driver Licenses, and when applicable their FAA Pilot Licenses (a very small percentage of police officers fall into this category).  There may be various obscure licensing requirements for specialized police officers, such as FCC Radio Licenses.  There is no such thing as a Police Officer License.

My reasoning behind this is that professional licenses are generally open to public inspection.  Go ahead, check my licenses--all of them are available for public inspection online except for my Enrolled Agent license with the Department of the Treasury, Internal Revenue Service.  They will gladly conduct a license check if you write the Office of Professional Responsibility.

Back to the police.  They are not licensed.  POST certification is not a license.  It is a certification.  While POST certification can be revoked, it is exceedingly rare.  Professional licensing generally requires continuing education, accountability to a licensing authority, adherence to a code of ethics, public inspection of license, sometimes bonding and/or insurance requirement, and the ability of the licensing authority to discipline licensees.  A professional license can be revoked or suspended; thereby, making it impossible to work in that profession.

The media has succeeded where the government has failed, insofar as they have created a database of police officers who have been disciplined.  Unfortunately, this database does not cover all 50 states, but it is a tremendous tool that the government and the police have failed to implement on their own accord.

USA Today, along with several other media outlets, has investigated police misconduct nationwide and have released this report:

We found 85,000 cops who’ve been investigated for misconduct. Now you can read their records.

You can search their database of de-certified officers here (unfortunately California is one of the states not covered in this report):

Search the list of more than 30,000 police officers banned by 44 states.

Transparency is a wonderful thing, and because of the First Amendment we have a (mostly) free press that can be critical of the government and provide transparency and accountability when the government tries to frustrate these basic tenants of a free society.